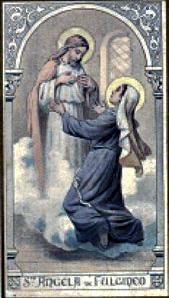 Angela of Foligno was born into a wealthy family of Foligno, a town near Assisi, in Umbria, Italy, in 1248. Angela married at a young age but lived “wildly, adulterously, and sacrilegiously.” A "superficial education" gave Angela a false sense of superiority over those around her who chose lives of service and sacrifice. But events of the time inspired her to reconsider her life, which she began to see as filled with sin. She prayed to Saint Francis of Assisi, who visited her in a vision in 1285 with instructions on how to begin her conversion. Three years later her mother and, within a few months, her husband and all of her children died. Angela sold all her belongings and joined the Third Order of St. Francis. Considered a "great medieval mystic," she is said to have exhibited stigmata and to have received mystical revelations, which she dictated to a scribe in the late 1200s. These accounts are contained in a compilation of two works, usually published under the title Il Libro della Beata Angela da Foligno. She later established a community of sisters in Foligno and by example added a Third Order rule to live commonly but without being bound to enclosure, so as to better contribute works of charity. Pope Innocent XIII beatified Angela in 1693, and on October 9, 2013, Pope Francis declared her a saint. Her patrons are those afflicted by sexual temptation, as well as widows. 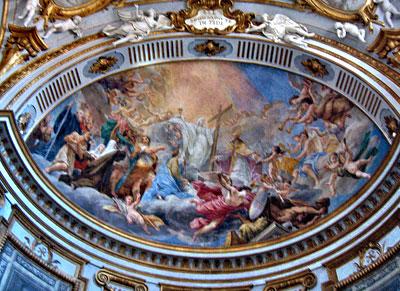 To see an explanation of a quote famously associated with Angela of Foligno, see "Blessed Angela di Foligno: Resting in Crucified Love," by Anthony Lilles.

Image 2: St. Felician Entrusting Foligno to Religion, by Francesco Mancini (1679-1758). From a fresco in the Cathedral of San Feliciano, Foligno, Italy. Source: http://en.wikipedia.org/wiki/File:Foligno088.jpg

The Canonization of Angela of Foligno (Video)