One of the Twenty-six Martyrs of Japan, San Felipe de Jesús (Saint Philip of Jesus) was a Spaniard born in Mexico City in 1572 who became a Catholic 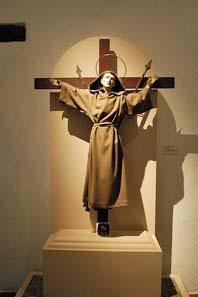 missionary. He joined the Reformed Franciscans of the Province of St. Didacus, founded in Mexico by Saint Peter Baptista, but left shortly thereafter (in 1589) to pursue business opportunities in the Philippines. He was readmitted in 1590 while still in Manila and was instructed to return to Mexico to be ordained. He sailed on 12 July 1596, but a storm drove the vessel onto the coast of Japan. The governor of the province confiscated the ship and imprisoned its crew and passengers, convinced that it was proof of Spain's intent to conquer Japan. Felipe and Peter Baptista, who was also on the ship, were arrested, tortured, and eventually crucified in Nagasaki with twenty-four others, including children. All twenty-six martyrs were canonized on June 8, 1862, by Pope Pius IX.