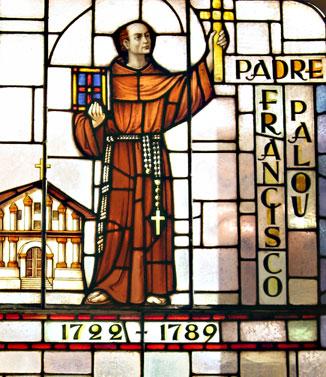 Francisco Palóu was born in 1723 in Palma de Majorca, Spain, and died in Mexico in 1789 at the age of 66. When he was 17 years old, he joined the Franciscan Order and, along with his mentor Junípero Serra, began a history of enormous contributions to the monastery movement of California and Mexico, building numerous missions there, many of which still exist today. In 1740 Palóu traveled to New Spain and served as a missionary in Queretaro. In 1768, when the Jesuits were expelled from Baja California, the Franciscans replaced them. Palóu was assigned to the Mission of San Javier and later became the head of the Baja California missions when Serra moved north to found the new mission providence of Alta California. Palóu’s legacy is vast. He played a key role in establishing several of the California missions, among them Mission San Francisco de Asís, which is the sixth of twenty-one California missions and designated San Francisco Historical Landmark # 1. He also wrote important documents about the history of the California missions and about Junípero Serra.