In 1769 Blessed Junipero Serra led four other Franciscan friars to present day San Diego where, on July 16, they formally dedicated the first of what would ultimately grow to be 21 missions spread across 600 miles of California’s coast and coastal valleys. These missions, all of which are still in existence, were meant to solidify the hold of the Spanish empire in the northern reaches of what was then called “New Spain.” They did that very well. In fact, they protected not just Spanish, claims but also the claims of the Mexican government that succeeded Spain, and the United States government that succeeded the Mexican government in the territory. The missions were the Spanish presence in California. While the Franciscan friars, generally a team of only two per mission, were able to establish 21 missions, the entire Spanish buearacracy and army could establish only four presidios (San Diego, Monterey, San Francisco, and Santa Barbara.)

The establishment of these missions and the work of the Franciscans in them have had a profound impact not just on the history of California but on the history of the United States. Following are two examples that will be explored more fully.

The westward expansion of the U.S.

Generally, the “opening of the American West” is credited to Daniel Boone in 1775. However, Boone was well behind the Franciscans. When Boone completed the Wilderness Road into Kentucky, there were already five well-established missions on the still unknown west coast. When western expansion began in earnest in the 1820s, all of the missions were thriving in California. The pioneers of the mid-1800s left St. Louis and crossed a generally empty Missouri, an empty Kansas, an equally empty Colorado, even more empty Utah, and absolutely empty Nevada to arrive in California.  Roads, harbors, communities, agricultural and commercial establishments, schools and of course churches awaited them. When the United States acquired California in 1846 there were no hostile natives to subdue. The natives of California had been living a life according to the dictates of the Spanish for almost 80 years. The settling of California by Americans was not a conquering of the wilderness. The Franciscans had done that for them!

Long after the missions had stopped fulfilling their original role, that of converting the native populace to Catholicism, they continued to influence the political life of California. The missions were generally the largest buildings and certainly the largest landholders in California. After Mexican Independence the missions several times found themselves as the sites of critical battles between the various factions trying to establish their own form of government on the New Republic. During the Mexican American War the missions found themselves as the actual objectives of battles. Several of the missions served as headquarters for both Mexican and American forces during the war.

The role of the missions in thwarting Russian plans 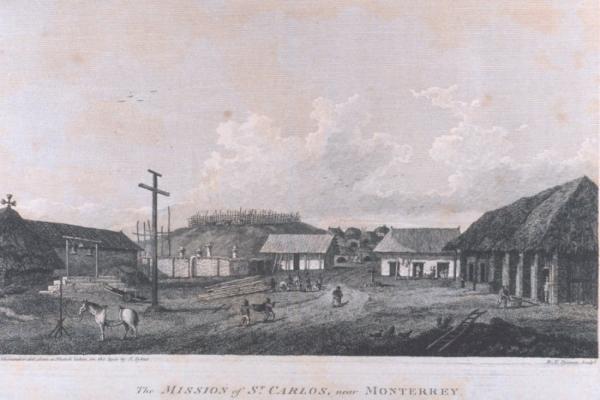 In the 18th century California was the cynosure of at least three very ambitious empires. The British, the Russians and the Americans all had eager eyes on the West Coast of the North American continent. The British sent George Vancouver up the west coast of the United States in search of the hoped for “Northwest Passage.” Vancouver took advantage of the opportunity to observe the Spanish presence in California. Vancouver, who assessed the Spanish Army as  “totally incapable of making any resistance against foreign invasion,” also noted the profound impact the Franciscans had on the colony. He found it almost impossible to believe how “so small a body of men” kept the natives controlled “without resorting to harsh or unjustifiable measures.” When Vancouver made these observations in 1792, there were probably only about 30 Franciscans  in 15 widely separated missions along the 600 miles of then-settled California. These men, as they founded missions and taught the natives, were oftentimes living in holes dug in the hillsides or crude shelters of thatch and mud. They were surviving on the meanest of foodstuffs and undoubtedly would have starved had it not been for the good graces of the native people. Junipero Serra himself reported that “Those who are the main supporters of our people are the gentiles. Thanks to them we live."1  Despite these grim circumstances, the Franciscans imposed a very definite Spanish footprint in California, one that is still visible today. Just how deep that footprint was would be made very clear in the next fifty years.

The British, viewing the extent of the mission holdings up and down the California coast, never made any serious attempts to colonize the territory. Realizing that not only an ocean but also a continent separated California and their homeland, they never attempted any permanent settlements. Not so the Russians.

For many years the Russians had exercised a very large presence on the western side of the North American continent. It was called Alaska. Russian fur traders had been sailing the west coast of the North American continent since the early 16th century. The Russians were not at all dissuaded by Spanish claims to Alta California. Those claims were based primarily on the Treaty of Tordesillas, which had been emplaced in 1494 by Pope Alexander VI. The treaty was meant to settle a dispute between Spain and Portugal regarding their claims in the New World.  Orthodox Russia was not about to give much weight to a treaty emplaced by a Catholic Pope between two Catholic countries. In 1812 the Russians made a very firm pronouncement of their intentions in California by establishing a fort near Bodega Bay. This was meant to be just the first of a series of posts and forts protecting their claim to the territory. By the time the Russians built their first fort, all but two of the chain of 21 Franciscan missions had been completed. The Russians had come to the game much too late with much too little. They could not hope to match the colonizing efforts of the Spanish, nor the fervor of the Franciscans. 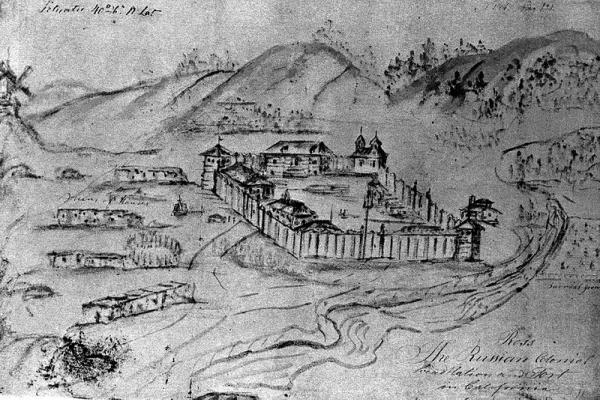 The fur trade, though, was too lucrative for the Russians to give up without testing the resolve of Spain to hold California “off limits.” In 1815, the Spanish military brought to Mission San Fernando a group of Russian sailors and seal-hunting Aleuts who had been captured near San Pedro.  It is a comment on where power lay in California at that time that the military, after capturing what were criminals under Spanish law, took them to one of the Missions and not to one of the presidios.  1815 was the halfway point of the Mexican war for independence from Spain. The unfortunate Russian fur traders were caught up in the savagery and confusion of the Mexican revolution. The missions, throughout the Revolution, stayed aloof from politics and it was probably the uncertainty of the political situation from day to day which dictated the prisoners being held at Mission San Fernando.  The story of the imprisonment of the Russians at San Fernando is one of the most sensational stories in the entire history of the California missions. It was not recorded until many years after the events and is a second hand chronicle written not by one of the captives, but by a man who interviewed one of the captives. He describes the attempts of “Spanish clerics” to get the Russians to repudiate their Orthodox religion and adopt Roman Catholicism. According to this account the seal hunters were horribly tortured, fingers were cut off, and one man disemboweled. The story has subsequently been thoroughly examined and analyzed by historians and generally deemed to be almost a complete fabrication.  There is nothing in any contemporaneous record anywhere that such practices were engaged in by the Spanish in California, and particularly not by the Franciscans. In their almost 300-year history in California, whatever other wrongs they may have perpetrated, the Franciscans have never been accused of “conversion by torture” except in this one case.  In fact, all of the Franciscans in California in the 17th and 18th centuries were highly educated men, particularly in matters of Church doctrine and theology. They would have understood full well that a conversion must be a free act of will, and a conversion under duress would not be a conversion at all. One of the things that makes the story most suspect is that in addition to the torture he complains of, the narrator states that several of his crew took Indian wives and left the Russians to live under the Franciscans. It is hard to believe that someone who had been tortured or, at a minimum, seen his companions tortured would, even in an extreme romantic ardor, choose to live with the torturers.

The capture of the Russian sailors, however, excited more than ever the territorial paranoia held by officials in Mexico City. Coupled with the establishment of the outpost at Fort Ross, they began to look more seriously at the Franciscan’s plans for missions north of what would come to be called the “Golden Gate.”  Mission San Raphael was founded in 1817, and Mission San Francisco de Solano in 1823.2  The Russians maintained their presence in California at “Fort Ross” until 1841 when they abandoned forever their aspirations for California. Practical assessments made in the Russian bureaucracy came to the conclusions that they would be unable overcome the ubiquitous presence of the Franciscans.  Fort Ross was sold to John Sutter, who at that time was a Mexican citizen. When the United States acquired possession of California in 1846 it acquired Fort Ross, which today is operated as a California State Park.3

In 1846 Mexican rule of California effectively ended for all time when Commodore John Sloat sailed into Monterey Bay and declared that “henceforth California shall be part of the United States.” The Mexican officials, with no effective military force at hand, surrendered without a shot being fired, and in fact, from then forward California was indeed part of the United States. What would have been the result, though, if in 1846 Monterey was in the hands of a thriving Russian Empire, and not a struggling Mexican Republic? Had the Franciscans not so aggressively built the California mission system, the Russians might not have been at all dissuaded from settling large parts of California. Had the Russians and not the Spanish colonized California—had Monterey been a port staffed by an ascending imperialist Russia rather than a fledgling Mexican republic—Commander Sloat would not have had such an easy task in proclaiming in 1846 that “henceforth California will be a portion of the United States.”  Further, it is unlikely that forty years later Russia would have been so keen to divest itself of Alaska, if she and not Spain had established a chain of 21 outposts in California.

Unwittingly and unknowingly, the Franciscans had a huge impact on American History.

Notes:
1Gentiles was the term the Franciscans gave to non-converted Natives.

2It needs to be noted that in 1823 California was no longer part of the Spanish Empire, Mexico having gained its independence in 1821. Mission San Francisco de Solano, the last of the 21 Missions was the only one built under Mexican rule.

3There are some historians who assert that although John Sutter bought Fort Ross, he never actually paid for it. Thus, by some interpretations Fort Ross still belongs to Russia.

1. "The Mission of St. Carlos near Monterrey." Volume II, plate I from A Voyage of Discovery to the North Pacific Ocean and Round the World by Captain George Vancouver. Source: http://en.wikipedia.org/wiki/File:Vancouver-Carlos-mission.jpg