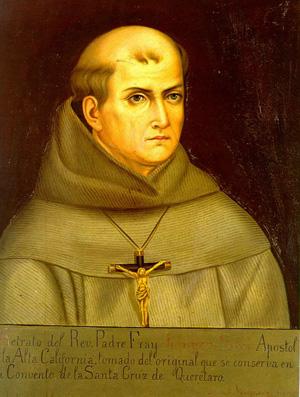 Junípero Serra Ferrer, OFM, was born Miguel José Serra on November 24, 1713, in Petra, Mallorca, Spain. He was an evangelist, a philosopher, and the founder of several missions in Alta California that eventually became such important cities as Los Angeles, San Francisco, Sacramento, and San Diego.

The Serra family was quite humble, and although Miguel's parents were illiterate, they always tried to give thier son a good education. At the age of 15 he began attending philosophy classes at the convent of San Francisco de Palma. On September 15, 1731, he took his religious vows and changed his name to Junípero.

In 1749, with a group of twenty Franciscan missionaries, including his friend and student Francisco Palou, he traveled to the Viceroyalty of New Spain, Mexico's colonial name. Junípero's first destination was Santiago Xalpan (today known as Jalpan de Serra) in the Sierra Gorda of Querétaro, where he remained for nine years dedicated to converting the Pames Indians and teaching them how to farm, raise livestock, and produce textiles.

In 1767 Carlos III ordered the expulsion of all Jesuits living in New Spain. The Jesuits were replaced by sixteen missionaries of the Franciscan Order led by Junípero. The delegation left the city of Mexico on July 14, 1767, sailed from the port of San Blas to the Baja California peninsula. After a short voyage, they arrived in Loreto, home of the Mission of Our Lady of Loreto, which is considered the mother of the missions of Alta and Baja California.

Junípero Serra died at the age of 71 and is buried in the Basilica of Mission San Carlos Borromeo, which he founded in Monterey, California. Junípero Serra is the only Spanish missionary that has a statue in the National Statuary Hall located in the United States Capitol, and where are represented the most illustrious people of the nation. Both Spain and the U.S. government have honored his memory by issuing postage stamps dedicated to the humble Franciscan missionary.

Junípero Serra used his name in recognition of San Junípero (Fra Ginepro, died 1258) one of the first companions of St. Francis of Assisi.