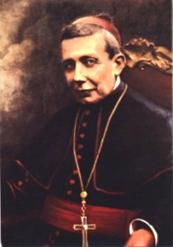 Marcelo Rafael José María de los Hilario Spínola y Maestre, also known as Blessed Marcelo Spínola y Maestre, was born on the island of San Fernando, Spain, on January 14, 1835. A diligent student from his youth on, he studied a number of subjects including Latin, French, Spanish, philosophy, physics, chemistry, and natural history. In 1855 he received a degree in law and opened a law office in Huelva, Spain, where he gave free legal service to the poor. By 1863 he had ceased his law practice and had been ordained a priest after attending seminary in Seville. A year later he was ordained and worked in various parishes until 1880, when he became titular bishop of Milos and auxiliary bishop of Seville. He later served in the diocese of Coria, the diocese of Málaga, and the metropolitan see of Seville. He became a cardinal priest in 1905.