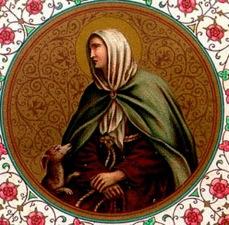 A native of Perugia, Salerno, Italy, Margaret lost her mother when she was seven years old. Her father soon remarried, but her new stepmother had little patience for the precocious girl. Margaret left home at a young age, living unwed with a nobleman for nine years and bearing his son. After her lover was murdered, the distraught young mother returned to her childhood home, only to be rejected by her father. She found shelter with the Franciscans in Cortona and became a penitent of the Third Order of St. Francis. After an epiphany in 1277, she asked the city of Cortona to establish a hospital for the sick and homeless, and she founded the congregation of the Tertiary Sisters, known as "le poverelle," who would be its nurses. Canonized in 1728 by Pope Benedict XIII, Margaret of Cortona is the patron saint of midwives, single mothers, reformed prostitutes, orphaned children, third children, the falsely accused, the insane, and the homeless.