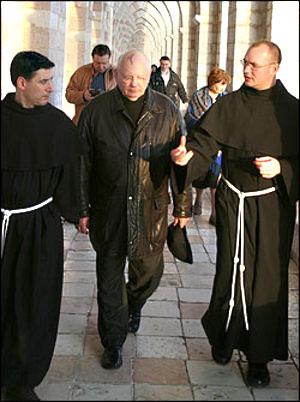 The relationship of Mikhail Gorbachev to San Francesco d’Assisi is truly extraordinary. Gorbachev, the last president of the USSR, had long proclaimed to be a communist atheist. But a surprise trip to the Basilica di San d’Assisi with his daughter Irina in March 2008 to pray at the saint's tomb signaled that Saint Francis has been a profound influence and catalyst on him.

As Father Mario DeCicco points out, while Gorbachev was busy transforming the Soviet Union into a more open society, supervising the dissolution of the USSR and preparing the way for the emergence of a revitalized and religious nation, Russia, he was an intense admirer of San Francesco, who he has called “Alter Christus.”

Is Gorbachev a Franciscan? Yes, at a genuine spiritual level, although he may or may not be a practicing Christian. If you search on Gorbachev and Saint Francis, you will find a number of articles, such as this one from The Daily Telegraph.

Courtesy of The Daily Telegraph