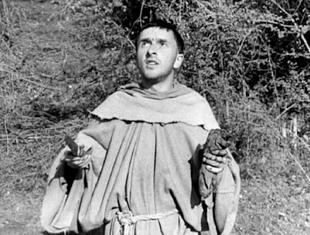 Saint Juniper (San Ginepro, d.1258), called "the renowned jester of the Lord," was one of the original followers of Saint Francis of Assisi, admitted to the order in 1210 by St. Francis. Juniper established Franciscan missions in various locations, and when St. Clare of Assisi was dying, he was at her side. Juniper is buried at Ara Coeli Church in Rome. His feast day is 29 January. Junípero Serra (1713–1784, Miquel Josep Serra i Ferrer) took the name in honor of Saint Juniper.

The best-known story about Juniper, told in the Little Flowers of St. Francis (Fioretti di San Francesco) is the tale of the pig's foot. When visiting a sick brother, Juniper asked how he might help the ailing man, to which the brother requested a simple meal of pig's feet. Juniper complied. He ventured to a nearby field, captured a pig there, and cut off one of its feet. He then prepared it for his brother's meal. When the pig's owner discovered the animal's disfigurement, he angrily accused St. Francis and the other Franciscans of thievery. St. Francis reprimanded Juniper, ordering him to apologize and make amends.

Juniper was mystified by the owner's vexation over the matter and concluded that he simply did not understand what a charitable act Juniper had performed. He went to the pig's owner and cheerfully retold the events that had transpired. When the man's anger was not assuaged, Juniper was convinced he was still misunderstood, so he enthusiastically repeated the story, embraced the man, and begged the owner to give him the rest of the pig for the sake of charity. Juniper must have been very persuasive, for the man relented and donated the pig to the Franciscans.

Roberto Rossellini depicted the story in his film Francesco, giullare di Dio, released in the United States as The Flowers of St. Francis (1950).