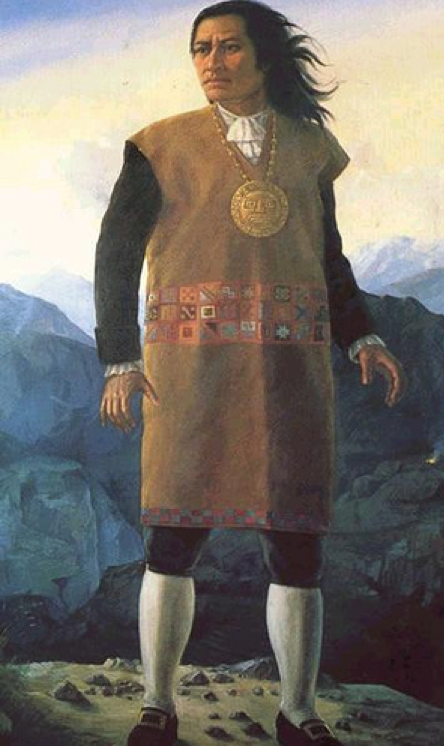 Early life
José Gabriel was born in Tinta in Cuzco. He was a “mestizo” with Spanish blood and the wealth and opportunities that that entailed. On his mother’s side, he was a direct descendent of Túpac Amaru, leader of the final failed stage of Inca resistance who in turn was son of Manco Inca, son of Huayna Cápac and half brother to Atahualpa and Huáscar.

José Gabriel received an education at the Jesuit church of San Francisco de Borja and went on to be granted titles by the Spanish vice royalty. He married an Afro-Indigenous woman in 1760 before inheriting authority over Tungasuca and Pampamarca from his older brother. He was of course, answerable to the Spanish governor. Identifying significantly with his indigenous heritage, José Gabriel was not blind to the suffering of his people. He repeated lobbied for better treatment of the indigenous from his position of relative power. What wealth he had it is said he used to alleviate the suffering of natives in economic slavery. Angered that his calls for humane treatment were at best ignored and at worst ridiculed, he grew increasingly embittered. He read the famous Royal Commentaries book by mixed-race indigenous author Garcilaso de la Vega, who almost 200 years earlier wrote an account of the history of the Incas that portrayed their culture in a positive light.

Revolt
His hatred for his oppressors grew ever stronger and he organized a rebellion. He began by refusing to carry out his responsibilities of debt collection on the indigenous under his authority. He was immediately threatened with death by the Spanish governor he answered to, Antonio de Arriaga. Not on good terms with the governor, he still attended a banquet with him that was hosted by a priest they both knew. Arriaga left later that night and was drunk. José Gabriel followed him outside where several of his supporters were waiting. They kidnapped him and spirited him away to a secure location where he was forced to write letters to tens of Spaniards arranging a gathering. They fell for the ruse and were surrounded by José Gabriel and 4,000 indigenous rebels. José Gabriel then publicly declared he was changing his name: he was now Túpac Amaru II, leader of a renewed indigenous resistance. The Spaniards were executed, starting with the governor.

Two thousand more natives joined the ranks of Túpac Amaru II’s rebels and they marched towards Cuzco. As they did so, they gained control over several provinces around the city. In the towns of these provinces, where Spaniards ruled, the natives raided Spanish property and killed every Spaniard they saw. To put down the rebellion, in 1780 Colonial Cuzco sent out 1,300 soldiers. These were made up of 578 Hispanics and 722 indigenous loyalists. The two forces met in Sangarara when the rebels won a decisive victory and seized the weapons and supplies of their enemies. 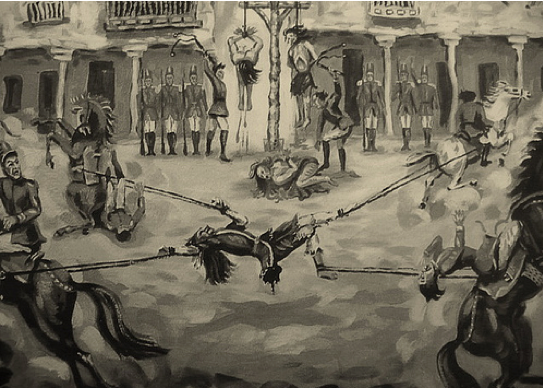 Without authorization from Túpac Amaru II, his indigenous rebels viciously slaughtered all 578 Spanish soldiers. This ended all potential support by Spanish-descended Peruvian-born Creoles and removed any idea of independence from Spain in their minds. They rallied behind the Spanish vice-royalty. From then on, the rebels suffered a number of defeats, and Cuzco was reinforced by troops sent from Lima. Túpac Amaru II was captured and his rebels defeated. He was taken to Cuzco’s Plaza de Armas and cruelly executed.

Túpac Amaru II's impact on Peru and south America generally was so great that it was the source name of left wing guerilla groups in Uruguay and elsewhere in the 1960s and 1970s. The Tupamaros, also known as the MLN-T (Movimiento de Liberación Nacional-Tupamaros or Tupamaros National Liberation Movement), was a left-wing urban guerrilla group in Uruguay that was inextricably linked to its most important leader, Raúl Sendic, and his brand of social politics. José Mujica, who later became president of Uruguay, was also a member.

The Tupamaros peaked as an insurgent force in 1970 and 1971. During this period they made liberal use of their Cárcel del Pueblo where they held those that they kidnapped and interrogated them, before making the results of these interviews public. A number of these hostages was later ransomed for considerable sums of money, including the Brazilian Consul in Montevideo, Aloysio Dias Gomide. In September 1971 over 100 imprisoned Tupamaros escaped the Punta Carretas prison by digging a hole across their cells and then a tunnel that led from the floor of one ground-level cell to the living room of a nearby home. As a result of this, the government summoned the military to prepare a counter-insurgency campaign to suppress the MLN.

In 1972 the group was quickly crippled by a series of events. First, it had started to engage in political violence since 1970, a choice that weakened its popular support. Second, the group responded to the assassination and/or disappearance of four Tupamaros on the part of illegal parapolice squads with a wave of high-profile assassinations that concentrated political opposition against them. Later on, the MLN directly attacked the military and killed a number of soldiers. The army's response was swift; it included the heavy use of torture and the flipping of high-ranking Tupamaros towards collaborating with them.