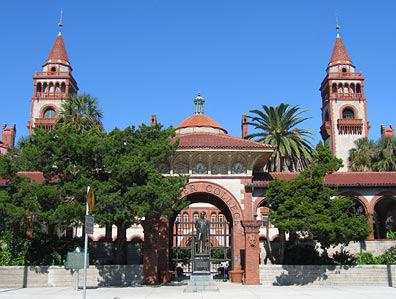 Founded in 1968, Flagler College in St. Augustine, Florida, is named for Henry Morrison Flagler, a Gilded Age industrialist, railroad pioneer, and partner with John D. Rockefeller in Standard Oil. Opened as a women’s college, Flagler was reorganized as coeducational in 1971. The aim of Flagler College is to provide a supportive and challenging environment in which students acquire knowledge, exercise good citizenship, and adhere to high ethical standards. The principal focus of the College's academic program is undergraduate education in selected liberal and preprofessional studies. The college has grown and remained true to its mission of providing a rich liberal arts education in a small, supportive environment.

Flagler College organized and hosted an important conference on a Franciscan subject.

• From La Florida to La California: The Genesis and Realization of Franciscan Evangelization in the Spanish Borderlands
• International Franciscan Conference: Information
• Conference Schedule

You can learn more about Flagler College at http://www.flagler.edu/