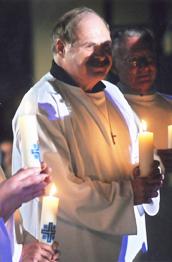 Dr. Gary Francisco Keller is Regents’ Professor of Chican@ and Hispanic studies and director of the Hispanic Research Center at Arizona State University (ASU). He has been at ASU since 1986; immediately before that he was provost for graduate studies and research at Binghamton University, State University of New York. The author of numerous books and articles on Hispanic and Chicana and Chicano literature, linguistics, film, and art, in recent years he has produced and directed four documentaries and their affiliated Web sites:

Saint Francis and the Americas is his most recent project.

As a result of an epiphany in Pordenone, Italy, Gary entered the Rite of Christian Initiation for Adults at Our Lady of the Angels, Franciscan Renewal Center, Scottsdale, Arizona, and was baptized on Easter Vigil 2008.