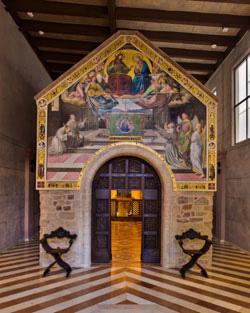 La Porziuncola Nuova, a scaled replica of Saint Francis's Porziuncola in Assisi, Italy, was dedicated in San Francisco on September 2008. Porziuncola means "small portion of land" and refers to the Benedictine chapel Saint Francis restored when he was a young man. The building of the Porziuncola Nuova was conceived of and led by Angela Alioto, a San Francisco attorney, thee-time mayoral candidate, and a devout Franciscan. Alioto's spiritual connection to St. Francis inspired her to recreate his chapel in the American city that bears his name. For more than three years she led the building effort, importing materials from Italy and recruiting the talents of accomplished Italian artisans. The finished Porziuncola Nuova is next to the National Shrine of Saint Francis on Vallejo Street in the North Beach neighborhood of San Francisco and is managed by the Knights of St. Francis, a group of volunteers dedicated to the Franciscan tenets.

An award-winning video about the project can be viewed at www.knightsofsaintfrancis.com.

For more information about the National Shrine of St. Francis, see www.shrinesf.org/welcome_menu.htm.

An announcement from the Knights of Saint Francis describes the history of the Porziuncola Nuova and its features. Read it in English, Spanish, or Italian.

• An Oasis in the City to Honor Saint Francis (San Francisco Chronicle, October 16, 2011)