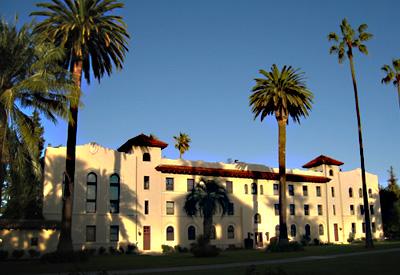 Santa Clara University (SCU) is named for St. Clare of Assisi (c. 1193-1253), religious mystic and follower of apostolic poverty, spiritual friend of St. Francis, and the first woman in Western Europe to compose a rule of religious life for women. SCU was founded in 1851 by the Society of Jesus as "Santa Clara College," and is California's oldest operating institution of higher learning. It was established on the site of Mission Santa Clara de Asís, the eighth of the original 21 California missions. The 106-acre campus is located in Santa Clara, Calif., at the southern tip of the San Francisco Bay, approximately two miles from San Jose International Airport.

The 9,000-student, Jesuit, Catholic university draws on a more than 450-year-tradition of educating the whole person for a life of service and leadership. This diverse community of scholars, characterized by small classes and a values-oriented curriculum, is dedicated to educating students for competence, conscience, and compassion.

Santa Clara University is the only Jesuit institution of higher education named for a woman. For 110 years, Santa Clara was an all-male school. In 1961, women were accepted as undergraduates and Santa Clara became the first coeducational Catholic university in California. The number of students tripled over the next decade. In the early 1970s, the Board of Trustees voted to limit the size of the undergraduate population, an action that was intended to preserve the character and ensure the quality of the University for generations to come.