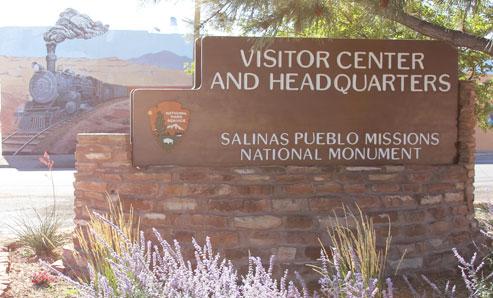 The Salinas Pueblo Missions National Monument is in central New Mexico near the town of Mountainair, where the main park visitor center is located. Early in the seventeenth century Spanish Franciscans pursued missionary activities there, then inhabited by various Puebloan groups. By the late 1670s famine and Apache warfare forced all inhabitants to abandon the area, which the Spaniards had named the Salinas District. Today austere yet beautiful ruins remain of this early contact between Pueblo Indians and Spanish Colonials: three mission churches at Quarai, Abó, and Gran Quivira and the partially excavated pueblo of Las Humanas or, as it is known today, the Gran Quivira pueblo. For a map of the area, click here

As with all historic areas administered by the National Park Service, the Salinas Pueblo National Monument was listed on the National Register of Historic Places on October 15, 1966. On December 19, 1980 it was enlarged, and two New Mexico State Monuments were absorbed on November 2, 1981. It was renamed on October 28, 1988.

An extraordinary publication by James E. Ivey, In the Midst of a Loneliness: The Architectural History of the Salinas Missions (1988), is available online and provides a wealth of information about the Salinas Pueblo Missions.

We also recommend the Rozylowicz family website, which provides extraordinary and exemplary information on Abo, Quarai, and Gran Quivira.